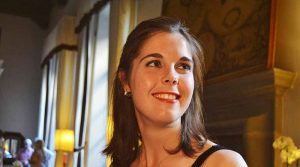 Born in Florence in 1988, Gaia immediately shows a clear interest and an undeniable musical gift and at the age of 18 she gets the first Diploma at “Cherubini” Conservatory, as well as the classical secondary school Diploma. Two years later she obtains the Master in Musical Perfofmance with the highest score.

During the following years she refines her playing attending the Scuola di Musica di Fiesole with Pietro de Maria and the Imola Piano Academy with Vovka Ashkenazy. At the same time she deepens her passion for chamber music playing in various ensembles, from the duet to the chamber orchestra, and attending the courses of Bruno Canino, Piernarciso Masi, Antonello Farulli e Mario Ancillotti. In 2017 she ends her academic career obtaining the Master en Interpretation Musicale – Concert with the professor Jean-François Antonioli.

She starts very soon to play on stage and she performs for many important musical associations.

She is passionately dedicated to the re-discovery of italian authors not enough known. In 2020 she begins the recording of the Giovanni Sgambati Complete Piano Works for the label Brilliant Classics, in 4 CD. The first volume (2 CD) has been published in 2022, the second one (2 CD) is scheduled for 2023. Always for Brilliant Classics, in 2020 she records the Concerto Gregoriano di P. A. Yon with the organist Tommaso Mazzoletti, in Lausanne Cathedral.

Aware of the importance of the exchange of experience with other musicians, Gaia participates at many competitions winning the first prize in 14 of them. Thanks to that, she has the opportunity to attend the Sommerakademie at Mozarteum of Salzburg. Since 2015 she organizes musical events, managing the press office of Florence University Choir up to 2017. In this year, she is named artistic director of Festival Santa Croce, which has three editions in front of more than 600 people.

Since 2019, she is president and artistic director of the association Les Concerts Vaudois, which organizes classical music concerts in Canton de Vaud, in Switzerland (www.lesconcertsvaudois.com).

Gaia teaches since the age of 19, a passion which brings her to obtain the Master in Musical Pedagogy in 2015. Since 2021 she is piano professor at the Conservatoire de l’Ouest Vaudois.